"It is horrifying that we have to fight our own government to save the environment." - Ansel Adams


The wolverine, Gulo gulo (Gulo is Latin for "glutton"), also referred to as glutton, carcajou, skunk bear (by the Blackfeet Indians), quickhatch, or gulon, is the largest land-dwelling species of the family Mustelidae (weasels). It is a stocky and muscular carnivore, more closely resembling a small bear than other mustelids. The wolverine has a reputation for ferocity and strength out of proportion to its size, with the documented ability to kill prey many times its size.1


Anatomically, the wolverine is a stocky and muscular animal. With short legs, broad and rounded head, and small eyes with short rounded ears, it resembles a bear more than other mustelids. Its legs are short, while its large five-toed paws and plantigrade posture facilitate movement through deep snow.2

The Wolverine is one of the rarest animals in Yellowstone National Park and there have been very few sightings. If you happen to see one, if you can, take some pictures (and GPS the location if possible) and report your sighting to any ranger or visitor center. "The wolverine is the largest land species of the “mustelid” or weasel family, with adults weighing 17 to 40 pounds. It has thick brown fur, with a lighter brown or blonde “stripe” along its sides. It has large feet for traversing snow and strong jaws to enable it to feed on frozen carrion and bones. The wolverine inhabits boreal forests in the contiguous United States, Canada and Alaska." (US Fish and Wildlife Service)

The U.S. Fish and Wildlife Service has determined: "Wolverine to be Designated a Candidate for Endangered Species Protection. The wolverine will be added to the list of candidates for Endangered Species Act (ESA) protection, where its status will be reviewed annually." This is great news and a long time coming. After evaluating scientific information and studies, the US Forest Service has made this new press release: 13 December 2010 (this is an Adobe pdf document). The wolverine is probably the rarest animal seen in Yellowstone.


The US Fish and Wildlife Service: "Wolverines are the largest land-dwelling member of the mustelid family and are extremely rare in the continental United States. They are also extremely rare on the western lowlands of the Refuge (Kenai National Wildlife Refuge). Occasionally wolverine tracks in snow in alpine areas can be seen from an airplane, and if followed, a wolverine can sometimes be observed. Primarily a scavenger, wolverine have powerful jaws for eating the frozen meat of winter-killed animals, and large teeth to crush the bones and skin of carcasses left behind by wolves and bears. Wolverine are solitary animals, coming together only for a brief mating season. Males have territories of up to 240 miles and travel up to 40 miles/day in search of food; females maintain smaller territories of 50-100 miles. Because the species requires expansive tracks of undisturbed wilderness, wolverine have all but disappeared from much of their historical range in the Lower 48."

The following information is provided by Yellowstone National Park: 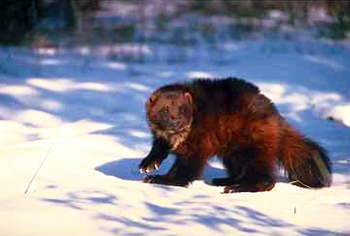 Eat burrowing rodents, birds, eggs, beavers, squirrels, marmots, mice, and vegetation; chiefly a scavenger in winter, but has also been known to take large prey such as deer or elk.

Active year-round, intermittently throughout the day.

Breed April to October; 1 litter of 2–4 young each year.

Den under log jams and uprooted trees in avalanche chutes.

Solitary except when breeding.


In 2005, researchers began a 5-year field study to gather information about this species in east Yellowstone National Park and the adjoining Shoshone and Gallatin National Forests. Animals are being livetrapped and fitted with radio collars equipped with Global Positioning Systems to track their movement. 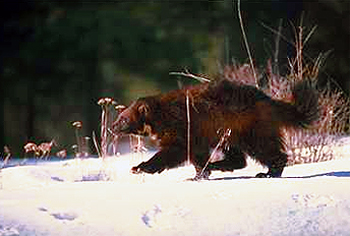 If you find only tracks, measure and photograph them carefully, then consult a track field guide for identification. And consider yourself very lucky to see a wolverine in Yellowstone. These rare and elusive animals are very seldomly seen, so even those who study them seldom have an opportunity to see one! If you think you see a wolverine or wolverine tracks, please report them promptly to a ranger or visitor center. Also, if you have a chance, please take photos or video of the tracks (please place something beside the track to help determine size - pen, pencil, comb, etc.) or animal. For animals so rarely recorded, every observation is useful and important.

Rare Animal Report Form (this is an Adobe pdf form)


See this link for a 2011 Absaroka Beartooth Project Wrap-up. For other wolverine research and information, please see the following Wolverine Spring Newsletters: 2009, 2008, 2007, and 2006 (these are Adobe pdf documents).


Also see these page for Yellowstone Animal / Mammal information Animal Page or the Mammal List (this is an Adobe pdf document).


Please see The Wolverine Foundation and Wildlife Conservation Society for more information and how you can help.

2 Action Plan for the conservation of Wolverines (Gulo gulo) in Europe by Arild Landa, Mats Lindén and Ilpo Kojola (this is an Adobe pdf document).


Please Report any Possible Sightings to any Ranger or Visitor Center!